Augmented Reality is gradually overtaking virtual reality. With AR, users are able to interact with the overlay objects, immerse in games, and mend information around them. The evolution of 3D displays is gradually shifting gears as augmented reality designers change how users communicate with apps. While this is just the beginning, revolutionising user experience with AR is quite possible now. Here’s how!

What AR does to woo users is that it blends the digital information with the physical world, instantly offering real-time feedback to users. AR enables interacting with information rather than merely consuming it. On the other hand, we have Internet of Things aiding AR-driven businesses with real-time data simulation.

A recent study indicates the perks of real-time feedback in mobile augmented reality for smartphones. This report concludes that AR comes handy in reducing the need to shift focus between the instructions and real, physical objects.

Take a look at how AR helps users to cook, right from holding the pan to tossing the items and manoeuvring them as and when needed.

Here, the pan is equipped to simulate the food weight and allow users to interact with it through actions like flipping, etc. With apps enabled to read temperatures it can actually mimic various cooking stages. This elevates the user experience as they are assured of whether or not they are on the right track.

There are basically three major ways to equip AR for enhancing user experience.

Any interaction through AR will involve users to either command verbally, tap on the virtual buttons or navigate through the menu. This involves costs associated with every gesture that yield results. The cost of interaction largely defines the user experience, and one way to gauge it is to have a user flow in place. 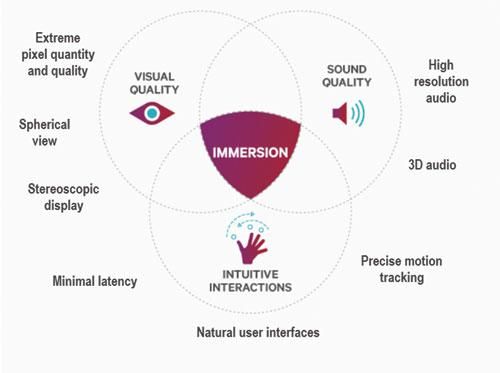 Nothing harms user productivity like working extra to access information or an unintuitive layout. Performing real-world tasks will need AR app designers to identify a way to communicate with the end users and vice versa. Using augmented reality to minimise or eliminate the interaction cost is one way to leverage the technology. Another way is blending the in-app features harmoniously with the real world so that the interaction appears almost seamless.

Consider how users want to see the furniture that they are thinking of buying
Ikea thought about it long time back.

Another aspect of AR is limiting the occasions for users to strain their memory. This means, users won’t be communicating keeping in mind the previous step or the next. This frees them to naturally flow with the simulated environment.

For example, any researcher testing drugs on animals will use plenty of substances based on certain rules. Such a sensitive task involves observing drug reaction, dosage, and recording the data in real-time. Users need to perform such tasks with utmost precision and will require augmented reality to mitigate the perils of breaking protocols or missing out on an important step.

Augmented reality app development spare users from switching their attention back and forth – screen to the task and vice versa. The users don’t have to go past multiple screens for retrieving information.

With seamless integration of both the worlds, the user manual is now on the user’s visual field. AR enables users with detailed and guided information, without losing them at any point. High retention and ease of performing a task are bound to balloon the user experience to the next level.

These AR apps add value to user journey by simplifying their purchasing decisions and bring in the ‘fun factor’ which is otherwise missing in the conventional apps. You have an opportunity to promote the use of AR as a crucial brand differentiator. You’d be able to strengthen brand loyalty and drive revenue. There’s a reason why engaged consumers are 90% more likely to come back to your mobile app and willing to spend 60% more per transaction.

With technology allowing more seamless interaction and hands-free 3D devices, incorporating gesture and gaze control can make way for mixed reality. This drives conversions by heightening user expectations as well. The objects turn more real anchoring in the real-world around the users. Offering more ways to interact with the objects including voice control, hands, palms, and other everyday gestures. This goes out to an extent of creating a distinctive feature-rich identity that users can associate with. Engaging multiple ways to blur the line between augmented and physical world till it completely fades out is an end result to aim for.

UX designs are bound to stay agile to this ever-evolving augmented reality. User experience will vary depending on how the technology progresses over time. Users will be demanding a lot from app design especially with 360 degrees control and bringing in more depth to augmented objects. The trends in mobile technology play a larger role as an interface to play around with the AR UI.

Radically altering the interface and filling up spaces around the users will enable them with more control and information in a given time. AR apps designers can balance the functionality with ease of use to open up spaces in dimensions by throwing a lot more to users. This will declutter the AR app and make the entire experience less cumbersome.

Try creating a more novel experience using the 2D screen with augmented reality by tying virtual objects to multiple physical locations. That’s exactly what Pokemon Go did a couple of years back. Transforming UX design will need you to place more reminders and virtual tools at different places within the scope of the field of view. Enabling users to interact with real conditions will drive users towards putting in richer contextual input.

AR is gradually moving towards bringing in more reality and eliminating the need for digital inputs. Ultimately, UX will depend a lot more on app offerings than simply relying on AR for gimmicks. The real test of an app depends on how it offers more usability and solve problems through augmented reality. With time, users are bound to demand more of it and relying on maximum augmented assistance.

Author Bio:
Dhaval Sarvaiya, one of the founders of Intelivita, a customer-centric mobile app development company, helps enterprises and startups overcome their digital transformation and mobility challenges with the might of on-demand solutions powered by cutting-edge technology. Connect with him on LinkedIn.