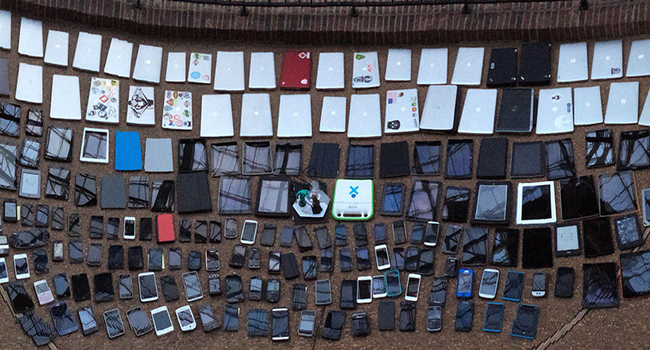 The explosion of screens, devices and platforms

Computing platforms are multiplying at unprecedented rates - how will developers, clients and app users cope with the looming diversity on our technology horizon?

Google’s open source flexibility is enabling a design for nearly every conceivable user need. The have-it-your-way ethos is great for Android’s market share, but the cost is uniformity. Added recently to the vast amount of devices running Android are the latest Google Nexus 6P and 5X. The number of distinct Android devices is up 7,000 from last year to nearly 24,093 with Samsung having a 37.8% share in those and only 2.6% using the latest Android OS. This means over 24,000 distinct devices can immediately use your app. So what can we do? Try to develop for everything and watch your support costs spiral or skip a manufacturer and risk losing an audience segment.

Even with a backlog of experience, developing for iOS is not simple. Capabilities vary considerably across hardware. The full set of iOS devices encompasses six different screen resolutions, with wearables causing even more confusion. Mercifully, 85% of those run the latest OS. And while it’s cumbersome to test on every Apple device, it’s not impossible.

But wait, there are other platforms to consider, too. Blackberry and Windows numbers are small, but they’re die-hard. Simplicity and user friendliness is winning converts to Sailfish. Firefox OS has potential for devices aimed at developing markets. Fragmentation is going to get worse before it gets better.

What this means for costs

Requirements gathering sprawls; architecture tries to future proof. You can’t test every Android device so you budget for post-launch fixes. Scaling forces tough decisions on streamlining features. All these versions create management overhead. Over 50% of an app project’s budget go on porting it to other devices and screens.

The Internet of Things

Connectivity and the rise of smart cities equals 212 billion objects online by 2020. This blizzard of new screens and devices, to support and to interact with, pushes beyond device fragmentation into uncharted platform fragmentation. Scaling back plans to focus on the major platforms seems prudent. But could there be another way?

The stream has become a flood.

25% of iOS developers and 18% of Android developers earn over $5,000 per month. But with processors, displays, even environmental sensors - fragmentation across devices threatens to overwhelm the working capacity of the average agency. Some are already turtling: But is this reactionary in the face of the tsunami on the horizon?

Wearables will gross $14B this year, a number that could grow fivefold in a decade. While smart bands, watches, glasses, and clothing may still seem like a novelty, they are following the same trajectory of adoption as tablets: that’s 20% ownership now, a couple of years after their appearance on the market. Driven by core concerns of fitness and health, simplifying everyday activities, and easy access to entertainment, over 100 million wearable units could be in shops by 2018.

Apple is predicted to move 24 million next-gen Apple TVs in 2016 with a focus on the gaming market. With the Apple TV App Store, a new generation of apps will rush to meet the demands of a bigger display, group audiences, unmapped viewing behaviours, and unprecedented integration with other iOS devices.

Your television won’t even be the smartest thing in the house. From the air conditioning to your bathroom scales, 30 billion (with a “b”) devices are predicted to be online by 2020. The potential for control and efficiency is vast but the bottleneck is manageability. To create clean design and drive unity across interfaces, agencies face monumental challenges of scale and complexity along the way.

How does an app development agency cope?

First, it requires unique thinking. Mobile apps fail because of poor experience for the user. This is down not to the interface - what the user sees - but to task flow and performance. Brief user sessions, limited controls, condensed displays, and just plain impatience all together comprise a very specific set of constraints. When the user wants it fast and clean, the answer is to offer less but make it usable.

This demands a wider skillset. Pretty but broken doesn’t fool anyone any more. User experience considers not just ease of use but what a user wants and feels. Human-computer interaction explores user ethnography and psychology. Information architecture structures content so it’s easy to find. All this should be subject to functional, performance, and usability testing.

A new problem with a new kind of developer requires a new tool set. Shockingly, agencies aren’t getting there: less than a third of developers are using third-party app development tools. Remove ads and cloud storage, and that number drops below a quarter.

With such high stakes and broad needs, why aren’t developers helping themselves with tools?